This season's going to be a tough ride for these characters.

It seemed like forever but the first episode of 'Game Of Thrones' season 6 finally arrived yesterday, and Jon Snow didn't suddenly snap his eyes open and rise from his chilly grave. Nope, he's dead. But 'The Red Woman' still presented a lot to take in for a premiere episode.

It turns out Melisandre isn't such a beauty after all

Of course, the fact that Snow hasn't returned in the very first episode doesn't mean anything; conspiracy theorists certainly haven't given up yet. But let's move away from that for now and look at what else is going on in George RR Martin's wartorn world.

First of all, Melisandre is a little... different. The red-headed beauty has had a rather trying time with Snow's death and being responsible for forcing a guy to torch his own daughter, and it really shows. She made quite the reveal after removing her enchanted necklace and turning into a rather scary, hairless old crone. Makes sense; she's well over 100-years-old, but what the hell is in that necklace?!

It's not too surprising; 'Game Of Thrones' fans will be well aware of many of the characters' abilities to change their face at will. But everytime we're reminded of this, we can't help but wonder what it means for the other characters - Jon Snow for example.

Arya has never felt so vulnerable

Arya Stark isn't looking too good either. She's still blind and very much homeless, forced to beg on the streets and getting herself beat up because, well, she can no longer defend herself. Also, we find out why exactly the Dothraki are keeping Daenerys hostage. Her late husband Khal Drogo seemed to forget to tell her that she would be expected to become a servant in the town of Vaes Dothrak upon his death. Meanwhile, back at Meereen, Tyrion isn't exactly keeping Dany's kingdom under control while she's err... otherwise engaged. There's the stench of rebellion in the air and they showing just how ruthless they can be. 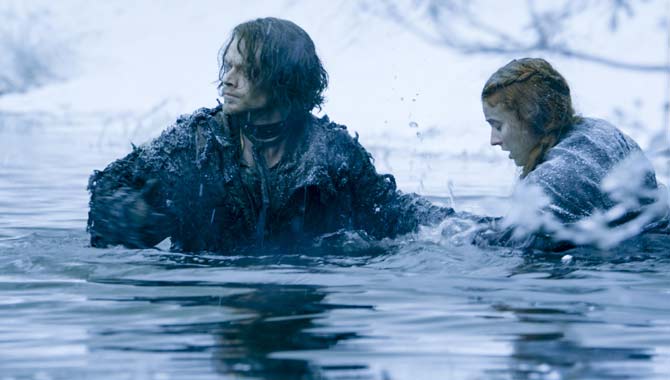 Sansa and Theon are still on the run

On the other hand, Sansa and Theon's escape seems to be going better than planned having bumped into Brienne and Podrick who rescue them from their plight. Plus, Cersei and Jaime are feeling pretty confident in their plans for revenge following the death of daughter Myrcella, but we're yet to see what they're about to release upon the world.