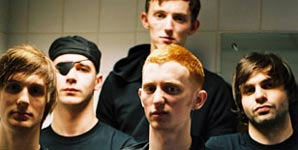 There is always the temptation to believe the hype when it comes to the next big thing. Latin American Funk Disco is hot say the NME? Trance Metal rules say Kerrang? Are they right? When the praise is universal for a band though, there's either some sort of conspiracy going on, or they might actually all be right.

Gallows are the brightest, hottest bundle of raw, intense energy on the underground scene for a number of years, and have been receiving universally positive plaudits in the press lately. Their sound is an in your face mix of straight out punk and melodic hardcore, delivered with a distinctive British edge. British punk somehow always sounds a little more 'real' than its American equivalent doesn't it? Crass vs. The Ramones? No contest!

On Abandon Ship, the Watford snarlers manage to stuff 3 minutes full of more passion, rage and intensity than a lot of bands manage to deliver during their entire careers. Coupling this sort of fierce rage with their departure from the fantastic In At the Deep End Records to the world of the major labels is surely a recipe for guaranteed success.