Review of Orchestra of Wolves Album by Gallows 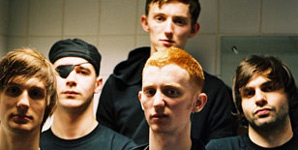 'Punk rock' is a much abused term these days. It's often applied to music that doesn't really merit it. Happily, though, Gallows album 'Orchestra Of Wolves' does merit it. The sustained intensity, aggression, passion and rage of this record is wonderful to behold.

Opening track 'Kill The Rhythm' sets the blueprint. It belts along at a fair old clip, propelled by occasionally discordant guitars with a howled vocal line surfing over the top. It's not easy to make out the lyrics (I had to check out a website for most of them), but overall, I reckon the whole record would be about two minutes shorter if the word 'fuck' was edited out of it. 'Come Friendly Bombs' is the only punk song I've ever heard that's inspired by John Betjeman. Like the august Laureate, Gallows aren't overly fond of Slough. It also has the same organ sound as The Specials' 'Ghost Town', and it contrasts nicely with the guitar sound.

'Abandon Ship' is a little more melodic, but it still borders on hysteria and there's a brutal quality to some of the guitar work and heavy rythms. 'In The Belly Of A Shark' perhaps doesn't work so well, dipping a toe in the waters of rock with a guitar solo that sounds a little out of place and ending in a manner that calls Iron Maiden to mind.

After a stop-start beginning, 'Six Years' hurtles along, There's an atonal quality to some of the guitar work and a quieter drop-down section in which the vocals sound like someone going insane in the house next door while a guitar plays a plaintive arpeggio. 'Rolling With The Punches' picks up the pace right from the off: it just starts, with no messing about. A wonderfully cheeky, chirpy organ part dances about over the riff now and again. And we get some proper singing as well rather than the agonised yelping we're used to. It's all a bit musical, but in a good way. 'Last Fight For The Living Dead' is an echoing coda.

'Just Because You Sleep Next To Me Doesn't Mean You Are Safe' takes a turn for the sinister. Heavily reverbed drums and spooky guitars give way to clipped, precise math-punk before the main riff and vocals dive in. 'I never want to fucking see you again' is a lyric that's fairly prominent and distinguishable. The bass sound in this song is also worth mentioning - a dirty growl that's bang on the money.

'Will Someone Shoot That Fucking Snake' is already a heavyweight contender for Song Title Of The Year, and also a contender for the prize awarded for the most uses of the word 'fuck' in a song. It's a tirade set to music. 'You need to get some self-repect. You always were a fucking prick'. Did I hear that right? Blimey. 'Stay Cold' is more bile spewing forth (a bad experience in Watford? Surely not) before giving way to a sort of moody reflectiveness, while 'I Promise This Won't Hurt' is a full-on assault that is never anything less than frantic.

Title track 'Orchestra Of Wolves' is a fine closer, and the longest track on the album. The lyrics I'll leave up to the listener to decode, but I'll say this: they certainly aren't pretty. In fact, some of the lyrics on this album I have a bit of a problem with. One man's bile can be hard to listen to sometimes if it doesn't draw on common experience. And a lot of it doesn't. It borders on the rantings on an angry young man in the boozer. You have to admire his passion, but I can't help wondering whether it could be directed more constructively.

The copy of the album I was sent came with a nine-track bonus CD which is also worth a listen. Six tracks were recorded for BBC sessions and also appear on the album, but there's also three others that don't. Good stuff.

If you're not keen on the sound of young people shouting and making a racket, then Gallows record is not for you. It draws on a rich tradition of British punk that's never been anywhere near the mainstream, and is a work full of passion, intensity and anger in which the pace rarely drops. I hope that the reported million-pound record deal Gallows have signed doesn't ruin it for everyone.