Review of Starting At The Rude Bois Single by Gallows 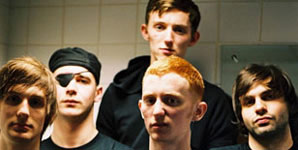 Irony being what it is, I perhaps shouldn't be surprised that this CD came into my hands just a few days after the death of Paul Fox, guitarist with The Ruts. Which sadly means that it feels like Gallows are paying their respects by releasing this cover version, which probably isn't how it was intended. But then, the turn of events can often make a mockery of intentions. And it's certainly a decent enough version of the song, done with care and a genuine reverence for the original, and has an energy and drive that a lot of today's pop music seems to lack. It acknowledges Gallows' heritage and binds them even more tightly to the tradition of British punk music that brought them about in the first place. The inclusion of Lethal Bizzle on MC-ing duties is a nicely contemporary touch - one that prompts a smile - and it's good to see that sort of cross-genre pollination happening.

Or is it all just a cynical box-ticking exercise? Tried and tested song? Check. Involvement of a buzz artist? Check. Single release to cover up lack of new material and the fact that the album's been milked to death? Erm ... dunno. There is something of the treading of water in all this - or so it seems - and I'm not convinced that's what Gallows should be about.