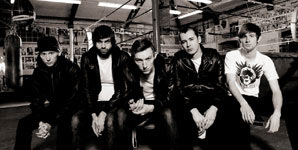 Just like the often-mentioned 'difficult' third album that some bands experience, there seems to be a point with young hip newcomers where the material on the smash hit first album starts to deviate a little from the hit single formula. Perhaps we could refer to this as the 'difficult' fourth single? Whether it's the boys themselves or the record company behind the release matters not - what matters is that JBYSNTMDMYS is a pretty poor choice for a single.

Abandon Ship and In The Belly of a Shark had real hooky qualities to them - qualities that are sadly missing here. Make no mistake, it is a constituent part of a superb and fresh debut album, but that's where it should stay. Put it this way - Sunday roasts need gravy, but most of us would be puzzled on being served gravy alone.