A Week In Music Featuring: Nas, Bat For Lashes, Efterklang, Gaggle, The Weeknd And Much More!

By Simon Jay Catling in Music Reviews on 08 October 2012 Continue reading: A Week In Music Featuring: Nas, Bat For Lashes, Efterklang, Gaggle, The Weeknd And Much More!

As choirs go, this one, Gaggle, does at least deserve the moniker of alternative, innovative and original. They may not win Choir Of The Year (nor do they probably want to) and they are unlikely to accept the tutelage of Gareth Malone or want the 'voice of an angel' amongst their ranks, however, Gaggle do take an established medium and all but tear up the rule book on style, interpretation, subject matter and target audience. To be fair, the use of the term 'choir' may be stretching the boundaries of truth a little. Gaggle, a 20-strong all-female group, are more alternative indie pop with a feel of high end performance art than anything you're ever likely to see on Songs Of Praise. The MC doing the introduction for Gusset, Lipstick and Wunderla (Just some of the cast of 20+) is never going to be Aled Jones or Russell Watson. (Thank God!)

'From The Mouth Of The Cave' is a 12 track set of alarming music that moves from pointed pop through to horrifying aural onslaughts that could scare the bejesus out of you. This, the debut album from Gaggle, is never boring. It is a very original, challenging, experimental and innovative attempt to deliver up something completely new. It does not just wash over you, it makes you pay attention; it commands your interest and, whatever your opinion at the end, it will have made an impact.

The album begins in a rather doom laden, oppressive style with the title track. 'From The Mouth Of The Cave' makes you feel as though you are being marched to your death through jungles and ruins in some terrifying scene from a slasher version of Indiana Jones. The tribal rhythms are heady and intoxicating, building a tremendous tension until thankfully a salvation is seemingly found and the powerful climax is dissipated. The single 'Army Of Birds' follows on and completely alters the perspective. The echoing, layering and harmonising in this near a cappella arrangement is first class pop. The sometimes conversational vocal battles and deep bass tones work brilliantly. (If Laurie Anderson ever decided to try her hand at pop again I would like to think it would sound a little like this.)

Continue reading: Gaggle - From The Mouth Of The Cave Album Review

All-female, 21-member, electronic choir Gaggle will release their new single 'Army of Birds' on May 21st prior to the release of their debut album 'From the Mouth of the Cave' on June 4th on Transgressive Records (Noisettes, Pulled Apart By Horses). 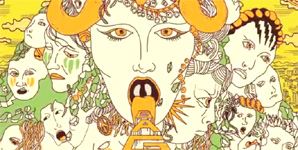