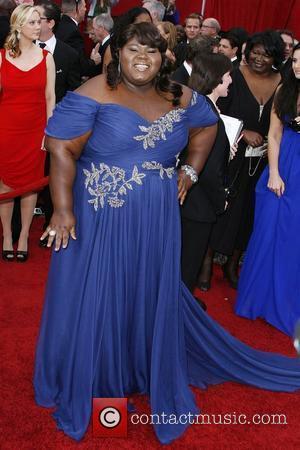 Gabourey Sidibe's mother has told Howard Stern to "get a life" after the shock jock made a series of unflattering comments about the plus-size actress' weight.
Stern caused controversy last week (beg08Mar10) after criticising the Precious star on his Sirius radio show, urging the 26 year old to seek help because "obesity" is a life-threatening condition.
He also claimed she will find it difficult to land any more roles in Hollywood because of her portly frame - and Sidibe's mum, Alice Tan Ridley, is fuming over the DJ's unkind comments.
She tells U.S. TV show Inside Edition, "Get a life. He can see, you can see, I can see Gabby is a big girl. She's a big woman, so what's wrong with that? She's not like everyone else in the world. I don't see him giving jobs out to anybody, so why should we care what he says? He might not hire her, but someone else will!"
Whoopi Goldberg has also blasted Stern for taking aim at the Oscar-nominated star - insisting Sidibe's size shouldn't overshadow her acting skills.
She told viewers of U.S. TV show The View, "Before you just dismiss her because of her size, take a look at her talent. She's a wonderful actress and that's all y'all need to know!"