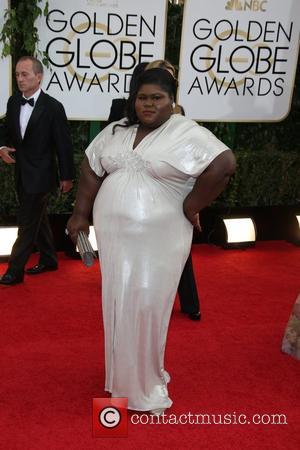 Actress Gabourey Sidibe has hit back at online critics who mocked her weight following her red carpet appearance at the Golden Globes.

The plus-sized Precious star was among the celebrity guests at Sunday's (12Jan14) prizegiving in Los Angeles, and posed for photographers in a cream dress by Daniel Musto.

However, she became the target of cruel jibes about her size on Twitter.com, with many users mocking her figure and choice of outfit.

Sidibe refused to let the nasty comments upset her and dismissed the abuse by revealing she is living a luxurious celebrity lifestyle, writing, "To people making mean comments about my Gg (Golden Globe) pics (sic), I mos def (most definitely) cried about it on that private jet on my way to my dream job last night."

She later thanked her fans for sending messages of support, adding, "Everyone is so wonderful and supportive... Thank you! Not my jet though. I'm not that fancy."