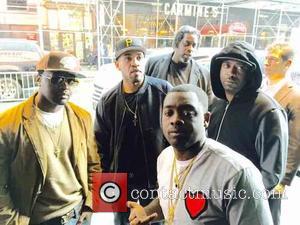 The hip-hop star, real name Curtis Stewart, was set to perform at the XXL 2015 Freshman Class concert at the Best Buy Theater on Broadway before cops apprehended him.

Editors at TMZ.com report that officials at the New York Police Department have had a warrant out for the star's arrest since February (15), after he allegedly became embroiled in a domestic dispute and assaulted a woman.

Following the arrest the rap collective, led by 50 Cent, took Kidd Kidd's place on the bill at the concert, which exhibits up and coming hip-hop artists.

During the gig 50 Cent told audiences, "We was gonna rap with Kidd Kidd but the police was out front and they snatched him. He'd be out by tomorrow."

G Unit - Wanna Get To Know You