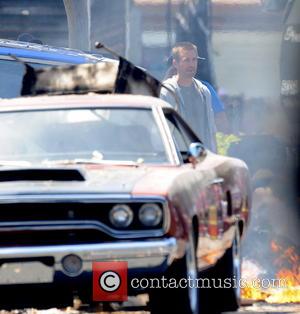 Fast & Furious movie producers have Paul Walker's father to thank for convincing the tragic actor's brothers to stand in as the late star's stunt doubles to help them complete the seventh instalment of the film franchise.

Paul Walker, Sr., 68, claims the Hollywood hunk's siblings Caleb and Cody were dubious about joining the cast of the upcoming Fast & Furious 7 and it was only after they consulted their dad that they agreed to take part.

The 68 year old tells the New York Daily News, "I had a hand in convincing Caleb and Cody. We had a pep talk because it was something they were obviously very skeptical of doing and I think it (the talk) helped."

Walker, Sr. admits the warm reception his other sons received from the actor's co-stars also played a big part in making Caleb and Cody feel comfortable with the project.

He adds, "They were obviously wary of filling Paul's shoes; it was an unenviable task and they didn't want to feel like they were intruding. But the incredible love they received from Tyrese (Gibson), Ludacris and Vin Diesel was an unbelievable help.

"Once they started working on the movie, it was about everybody pulling together to fill the void left behind by Paul...

"I'm very proud of both Caleb and Cody, and I'm sure this is something Paul would be proud of too."

Cody Walker, 25, has since landed a leading role in the next film in the street racing franchise, according to reports.

The actor died in a fiery car crash in November (13).