The Funeral Suits' new single, All Those Friendly People, will be released on March 19th, 2012. It is taken from their upcoming album, Lily of the Valley, which will be released in early June 2012.

The video for All Those Friendly People was directed by Shaun Ryan. At first glance, the opening scene of a joyful, well-dressed man in a masquerade mask looks charming, until you realise he is leading a woman to her death. When the pair arrive at the beach, the man takes the sack off the woman's head and sets two rabid pig men after her. The woman manages to escape, though, by running into the sea and swimming away.

The Funeral Suits hail from Ireland. They are: Brian James; Mik McKeogh; Greg McCarthy and Dar Grant. Their debut single, Colour Fade, was released in May 2011 and received support from the likes of Huw Stephens; Steve Lamacq and Zane Lowe. The Funeral Suits have already toured with bands such as Franz Ferdinand; The Maccabees and Passion Pit.

Lily of the Valley was recorded with the help of producer Stephen Street, who has worked with Blur in the past.

Funeral Suits - All Those Friendly... 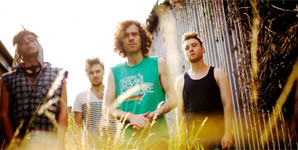