Funeral For A Friend - History Video 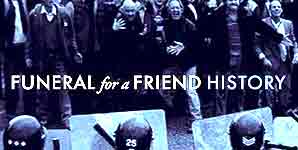 Funeral For A Friend
new single 'History' on November 14 2005

Funeral For A Friend release the third single from the massively successful 'Hours' album on Nov 14 2005. Entitled 'History', it will be available on Atlantic Records.

Funeral For A Friend have proved to be one of the most exciting and successful exponents of the post millennial rock renaissance. Spanning the divide between rock, pop and metal, they have constantly strived to expand on their considerable achievements this year. (60,000 album sales in just 2 weeks for the 'Hours' album… tearing up on Top Of The Pops for their FOURTH consecutive top 20 single… a barnstorming mainstage performance at Reading/Leeds… winning Best UK Band at the Kerrang Awards… etc etc).

The video accompanying the 'History' single is based around the heartrending effects of the miner's strikes in the mid eighties. As the band explained, this is a subject with special resonance for them:

"The members of Funeral for a Friend have all grown up within the hills and mountains of small mining communities in South Wales. The events of the miner strikes of the mid eighties hit heavily in our areas and some of us had family members who were deeply involved in it, whether it was fathers or uncles who worked the mines or close family friends, and it affected our families deeply.

We chose this concept for the video because of its very close ties to our backgrounds when we were growing up (although most of us were way too young at the time to fully understand what was going on around us). So we felt a strong tie to link the song History (a song about triumph over adversity and standing up for what you believe in) with these themes.

Funeral is not a political band by any means, but we have a history through our families and the mining communities we grew up in, so we felt it appropriate to highlight this with the video."

The 'History' single and video both serve to highlight the depth and maturity that Funeral For A Friend have achieved as an artistic entity. Eschewing bombast and bravado for subtle melodic interplay and sincere lyricism, 'History' showcases a band who have seamlessly transcended their genre limitations. It is a very special track from a very special band.

The Welsh quintet will also headline the 'Taste Of Chaos' tour across the UK this autumn. After taking on Japan, Australia and mainland Europe, they head to the UK for the following shows:

Joining our welsh heroes on the extravaganza will be The Used, Killswitch Engage, Rise Against and Story Of the Year.

'Welsh wonders top their brilliant debut album. One of the albums of the year.' – Kerrang
'So addictive it needs to be cut out of your hair like bubblegum!' NME
'Dead, dead good' – Nuts, Album Of The Week
'…pushes them ahead of their peers. A fine return'' Q
'Good guys. Great band. Brilliant album' Rocksound
'The songs are fantastic. Every single one of them. They've delivered a brilliant second album.' - Metal Hammer
'Staggeringly infectious' – Big Cheese, Album Of The Month

Funeral For A Friend - Best...

Funeral For A Friend - Streetcar...

Funeral For A Friend, History, Video... 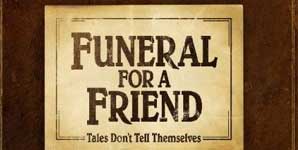