Formed in the early nineties', Fun Lovin' Criminals are perhaps best known for their 1996 release 'Scooby Snacks'. This is the trio's sixth album and they are currently promoting it on UK tour which will be followed by further dates around mainland Europe. 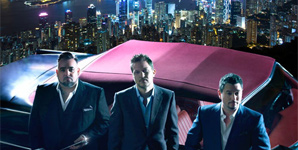 The FLC have long since had an air of cool about their music and it is very much something continued in 'Classic Fantastic', as they manage to create a soundtrack to a relaxed summer. The title track has a retro feel livened up by a brass section, while 'She Sings At The Sun' has an effortless charm. It's not all about kicking back though, with 'Mars' being an irresistible electro-funk hybrid and 'We, The Three' being a likely floor filler, but FLC are at their best when they set themselves into groove mode, as evidenced on 'Keep On Yellin''. The album finishes strongly in the shape of R'n'B influenced 'Rewind' and the likeable nostalgia captured by 'Mister Sun', leaving a considerable reminder of how good the band are at what they do, even if their chart bothering days are unlikely to return.