Electronic pop duo Frost are set to release their new single 'The Woods' on September 10th 2012 through FrostWorld Recordings ahead of the September 17th release of their third album 'Radiomagnetic'.

Ahead of 'The Woods' release, a music video has been released depicting the foreboding image of two children playing in the snow deep in a woodland area. They soon become aware of a menacing masked figure from whom they frantically run away. Despite the slight up-tempo feel of the electronic sound, the haunting soprano vocals really send a chill through the entire song though not necessarily in a bad way. The emotive effect of the track is quite an achievement.

Couple Aggie Peterson and Per Martinsen have so far released two albums over the last 11 years, 'Melodica' and 'Love! Revolution!', along with a string of cracking singles. They toured all across Europe and played at various prestigious music festivals such as Roskilde in Denmark and the Ãya Festival in Norway. The multi-talented pair have been involved in all sorts of projects between them from art shows and dystopia novels to writing music for silent films and producing underground dance music. They are currently preparing to play an event in the Russian 'ghost town' of Spitsbergen on September 1st 2012. 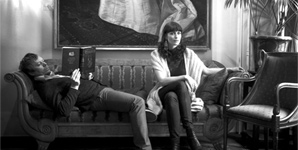