From Above - Not The Same Girl Video

From Above will release their debut single, Not The Same Girl, on January 22nd, 2012. It's the lead single from their debut album, Breaking From Above, which will be released on December 12th, 2011.

From Above are Seyi, Ashley Shaw, Daisy Evans, Chelsey Reynolds and Monique Robert. They have all had past experience in the music industry; Daisy will be familiar to those who were fans of S Club 8, a spin off of the popular British pop band S Club 7. The group formed in 2007 and went through several line up changes, while performing at night clubs up and down the UK.

From Above are managed by Mathew Knowles, who knows a thing or two about girl groups, having previously managed Destiny's Child, which featured his daughter, Beyonce. They are also the subject of their own reality show, also called Breaking From Above, which sees the girl group go through Knowles' famous Star Power Boot Camp, which deals with 30 days of hardcore vocal, physical, choreography and media training. 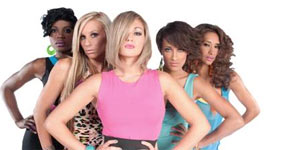 From Above - Not The Same Girl Video