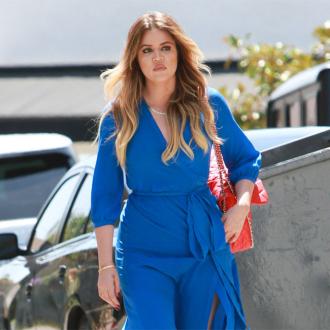 The 'Pop That' hitmaker, who started dating the reality TV star in April following her split from estranged husband Lamar Odom in December, presented the 'Keeping Up with the Kardashians' beauty with an 18-carat gold ring with natural green Colombian emeralds and natural yellow canary diamonds ahead of her milestone today (27.06.14).

The 29-year-old rapper purchased the ring from Rafaello & Company jewellers and its CEO Gabriel Jacobs told E! News: ''He mentioned how much Khloé loves flexible finger rings and was drawn to the Rafaello Couture collection.

''Khloé was ecstatic!! She gave French Montana a hug and a kiss and she gave me a big hug and said, 'Thank you so much!' ''

French spent more than $100,000 on gifts for his new girlfriend, including a $10,000 diamond gold grill and a $49,000 white Jeep, as she marked the occasion a day early at the upmarket Don Coqui restaurant in the Bronx, New York City.

A source previously revealed Khloé, who filed for divorce from Lamar after four years of marriage following rumours he was addicted to cocaine and cheated on her multiple times, is completely smitten with the rapper.

The insider said: ''Khloé adores him. She keeps telling everyone what a great guy he is.''