By Andrew Lockwood in Music Reviews on 02 February 2010

Review of French For Cartridge's album Liquorice released through Dinner With Daisy Records.

Une Cartouche, which is French for cartridge, is the 'side project' from which this band takes its name. Formed by two students of Goldsmith College London, Catherine Hentz and Henri Vaxby, their aim has been to put together atonal pop music. Their quite unique musical format is somewhat genre defying, has been described as Avant-Garde and has unsurprisingly attracted the alternative arty set, keen as they are to soak up some of the bands more off beat and experimental compositions. You could say it's a kind of musical performance art. 'Liquorice' is the follow up to the critically acclaimed 2006 album 'Cases' and has been mixed and mastered by S Husky Hoskuids, formally working partner of Tom Waits and My Brightest Diamond amongst others.

'Liquorice', the album, contains new material as well as alternative versions of a couple of French For Cartridge's back catalogue, namely 'One Hundred And One' and 'TV Dinner'. The latter has been completely reworked and is one of the highlights among the many on the album. The song starts off with a Sex Pistols do 'C'mon Everybody' guitar break which then collapses into a fragile, near theatrical, tense vocal. Two thirds of the way through the song changes again and turns all comic book on us, here the composition could easily pass for a chase scene from an old Batman caper (You'll have to add your own POW!), only to change direction right back at the end and revert to Catherine's very youthful, highly pitched, tight vocal. 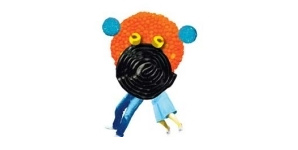