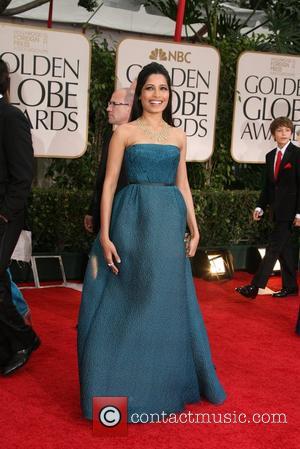 Freida Pinto has stripped down to her underwear for an Esquire magazine photo shoot, the 'Slumdog Millionaire' star posing in some of her most racy pictures yet ahead of her new film 'Trishna.' It's the first related shoot of any sort for the 27 year-old and she admitted that it was a little different to adapt to, reports The Press Association. "It was hard but it was a small crew, and they were good at not making their presence felt," said the actress, joking "They didn't go, 'Quick! She's nearly naked! Get your camera out!'" The issue comes out on news stands on March 9th.
Despite being 27, Pinto is still very much a fledgling star in the industry. Her big break undoubtedly came as Latika in the hugely successful British film 'Slumdog Millionaire,' which won her a share of the Screen Actors Guild Award for Outstanding Performance by a Cast in a Motion Picture as well as taking several other nominations during 2008's award season.
Since then she's not managed to quite reach those dizzying heights critically although she did appear in the block buster 'Rise Of The Planet Apes' last year, a film which took over $480 million in box office receipts. 'Trishna' is an adaptation of the Thomas Hardy novel 'Tess of the d'Urbervilles' and sees Pinto star alongside 'Four Lions' star Riz Ahmed.