Freida Pinto has admitted she liked seeing her male 'Immortals' co-stars ''objectified'' on the set of the movie while the actresses involved were able to enjoy themselves. 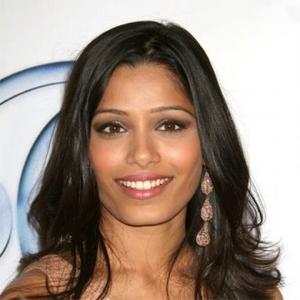 The Indian actress enjoyed seeing a gender reversal with all the "eye candy" on the set of the movie- where she got to play a Greek goddess surrounded by hunky male slaves.

She said: "It was interesting to be in a film where the men were objectified and the women could just enjoy themselves.

"I was excited about doing a project where I was covered up while the men were all wearing short skirts. It was a bit of an eye-candy situation but I'm talking more about the men than the women!"

Though the 26-year-old beauty loved making 'Immortals' with her scantily-clad clad co-stars, she recently admitted that being away on location so much means she no longer has a permanent home.

She said: "I'd like to say I live somewhere, but right now I'm all over the world with my three suitcases that I've been carrying with me for two years. I just keep changing the clothes in the bags."

The film has recently been released in the US, and is expected to be shown in Europe next year.

Freida Pinto goes to rehab for her next role

Freida Pinto Touches Down At LAX