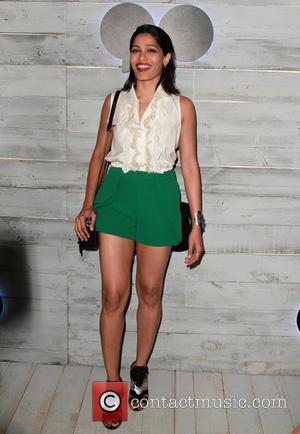 The Slumdog Millionaire star was photographed cosying up to the athlete and stealing a kiss outside the Fogo de Chao restaurant in Beverly Hills last week (12Oct15).

Photographers also caught the rumoured couple grabbing dessert at a nearby ice cream shop and running an errand to a local pharmacy.

Ronnie also hinted at his new relationship with a heartfelt post on Instagram.com over the weekend (18Oct15) when she celebrated the actress' 31st birthday with a trip to Vancouver, Canada. His photo featured the city's picturesque waterfront landscape, with what appeared to be Freida's silhouette. Ronnie added the caption, "Ughh horrible view... Morning meets birthday girl..."

The reported couple returned to Los Angeles later that night to celebrate the Indian beauty's birthday at The Nice Guy lounge, with guests including actor Sean Penn.

Freida split from her boyfriend and Slumdog Millionaire co-star Dev Patel in 2014 following a six-year romance. Despite the breakup, Freida insists they have continued to stay the best of friends.

"Everybody has their own little discoveries to make," Frieda told USA Today. "Their own surprises, their own disappointments, and they're all part and parcel of life. There is no way one person can sit down and go, 'But why did this happen to me?' Or, 'It was all going well, what the hell happened?'

"Running away from it is not going to help you find your answers... Dev and I are best friends. That's never going to change."