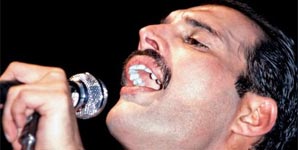 While Freddie Mercury dedicated the major part of his creative energies to the all-consuming project that was Queen, such was his appetite for music that not all of it could be fulfilled within the parameters of Queen. At these times Freddie ventured off into the uncharted new world of solo projects.

This special edition, released September 4, 2006 to celebrate his 60th anniversary, The Very Best of Freddie Mercury Solo, which includes a bonus CD of rare or unheard tracks, highlights those periods when Freddie channelled his inexhaustible love of music into new musical encounters, some intensely personal projects, others providing the excitement of collaborations with writers and performers who fired his imagination.

While most people would think Freddie's solo career began in 1985 with his Mr. Bad Guy album, it in fact began much earlier - back in 1973, with his cover versions of the Beach Boys' I Can Hear Music and Goffin-King's Goin' Back, released as the A and B sides of his first solo single under the pseudonym, Larry Lurex. Since the single disappeared without trace, it is not surprising few are aware of this inauspicious start to his solo career. Both are included here.


A number of tracks here come from the official first solo album, Mr. Bad Guy, recorded in 1983/85 in Munich during a period when Freddie was heavily into the club scene in the city. Freddie's love of the dance music he was surrounded by at the time shows through in tracks such as I Was Born To Love You and Living On My Own (which, remixed in 1993, gave Freddie a posthumous No.1 hit, an Ivor Novello award, and, surprisingly, the only No.1 of his solo career).

Freddie's love of theatre, and great admiration for his first pop idol, Cliff Richard, accounts for the track Time, the title song of Dave Clark's successful West End musical in which Cliff starred (the show, coincidentally, played at the Dominion Theatre, now the home to Queen's own smash hit musical, We Will Rock You).

One of the most musically fulfilling periods of Freddie's life was his musical love affair with Spanish opera diva, Montserrat CaballÃ©. From this unlikely, but magical union, came the tracks Barcelona, which Freddie wrote for Montserrat's home city and which became the theme for the Olympic games of 1992, and the high drama of Guide Me Home, and How Can I Go On.

Although Freddie only ever released two solo albums, Mr. Bad Guy and Barcelona, there are reports that he had plans, and, indeed, had started work on a 'covers' album. This is widely considered to be the origin of one of his most popular singles, his version of The Platters' classic The Great Pretender, released first by Freddie in 1987 (when it reached No.4) and subsequently reissued in 1993.

While CD1, with a few exceptions, features mostly versions as originally recorded, the second CD of the set is a feast of rarities and new and unheard remixes. Over half of the tracks featured are 2006 mixes.

In recognition of Freddie's own passion for new musical adventures and his love of the club music scene, for this release a number of his best loved tracks were handed over to some of today's most highly regarded up and coming international remixers: Pixel82, The Glimmers, George Demure, Sunshine People, Rank 1, Star Rider, No More Brothers and The Egg, all given an open brief to take Freddie's original and rework it in their own unique and unpredictable sound and style.

On a more retrospective level, a vocal and piano version of Your Kind of Lover and Freddie's a cappella delivery of Let's Turn It On, were selected to give an informal insight into Freddie at work in the studio and underline the fact that as well as a unique writer, he was also one of the finest vocalists we will ever hear. As Brian May has written: "Freddie sang with a joy and spontaneity that came from plucking his own inspiration from the air, or his own heart. It is hard to find a parallel anywhere for this man who combined composing with such outstanding performance."

CD 1 ends with a stunningly moving version of Freddie and Mike Moran's Guide Me Home performed by Swiss jazz pianist and Blue Note artist Thierry Lang, a native of Freddie's final home city of Montreux, and specially arranged and recorded by Lang as his own tribute to Freddie.