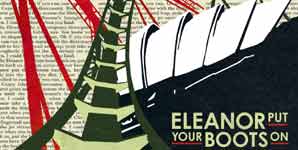 Franz Ferdinand have announced details of the release of a new single, Eleanor Put Your Boots On, through Domino Records on July 17th 2006 taken from their much acclaimed second album, You Could Have It So Much Better, which reached number 1 on its release last October.

For the single the band recorded & produced a totally new version in Benton Harbour, Michigan whilst the band were touring the U.S. Having evolved enormously through months of touring, the song has been amplified & beefed up, taking the diaphanous romance of the original & filling it out with new instrumentation .

Proving itself as a live favourite over the past few months, the single will be available on 2 x 7" and CD and will feature 2 brand new tracks Wine In The Afternoon, an easy summer romp that recalls and celebrates the joys of skiving off work or school ( and drinking wine , of course) and Ghost In The Ditch, a Nick McCarthy number recalling the off kilter charm of Syd Barrett.

Selling out an unprecedented 4 nights at London's Alexandra Palace in December of last year, the start of 2006 has seen the band tour extensively and firmly establish themselves as one of the worlds most successful bands.

January saw the band sell out the legendary Budokan venue in Tokyo. The Japanese tour was followed in February by a slot on The Big Day Out Festival which went across Australia and New Zealand and in March the band visited South America playing a number of shows with U2 as well as their own headline shows. April saw the band undertake an extensive 5-week tour of the U.S. with Death Cab For Cutie.

The band are currently preparing to head out across Europe where they will be headlining an unequalled 24 major festivals across the summer. This includes a homecoming slot at the T In The Park festival in Scotland in July and a prestigious headline appearance at the Reading / Leeds festival in late August.

Their second album has currently sold in excess of 2 million copies worldwide including 600,000 in the UK. The band were nominated for three Brit Awards, won the NME Live Band Awards and received 2 Grammy nominations.