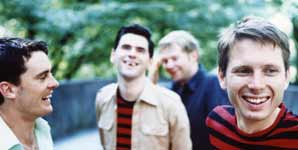 Franz Ferdinand release a new single, Walk Away, through Domino Records on Monday 5th December 2005. The single is taken from their number 1 album, You Could Have It So Much Better which is enjoying phenomenal worldwide success. During the week of release it was the biggest selling record across Europe and has gone top ten in every major market across the globe – a rare feat for a UK band.

The single was recorded as part of the album sessions in Scotland and New York and was produced by the band and Rich Costey. It will be released on 7", CD and DVD and features a number of exclusive B-side tracks, including a cover of Air's Sexy Boy. The full track-listings are as follows:

DVD
1. Walk Away (video)
2. Walk Away (the making of the video)
3. This Boy (live in Edinburgh)
Plus downloadable Franz Ferdinand wallpaper

The band have recently completed a sell out US tour. The tour culminated in a show at Madison Sq Gardens in NYC and an appearance on the prestigious Saturday Night Live Show in the US. They are also set to embark on their UK tour in mid November. The tour finishes with a unprecedented four night run at London's Alexandra Palace. The dates are as follows:


Tickets for the English dates can be purchased via www.gigsandtours.com, a 24hour cc hotline on 0871 220 0260 or directly from the venues.Tickets for the Aberdeen and Glasgow dates are available via www.ticketweb.co.uk or 08700 600 100.

Tickets are priced at Â£21.50 except London, where they will be Â£23.50.Support on the dates will come from Editors and The Rakes, except the London show on 2nd December where support is provided by Roots Manuva and The Long Blondes. The supports for the added 4th December show have yet to be announced.

The band will also be releasing a DVD on November 28th. The DVD not only includes live performances from around the globe but also a myriad of very special bonus features including a 40 minute documentary, a Franz karaoke and some rare footage on one of the bands first gigs in Glasgow. They also release a 12" of the in-demand Erol Alkan mix of Do You Want To on 21st November.