A match made in indie heaven as Franz Ferdinand and Sparks come together to form 'FFS'.

In one of the most intriguing musical collaborations of the year, indie stars Franz Ferdinand are to team up with new wave legends Sparks for a joint album to be released in the summer. Rumours have been abounding for the last month, but today the bands announced some details about their new project.

Working under the name ‘FFS’, their album will be self-titled and will be released via Domino Records on June 8th. They also shared an audio clip of their first single ‘P*** Off’, which will also be the closing track on the album. 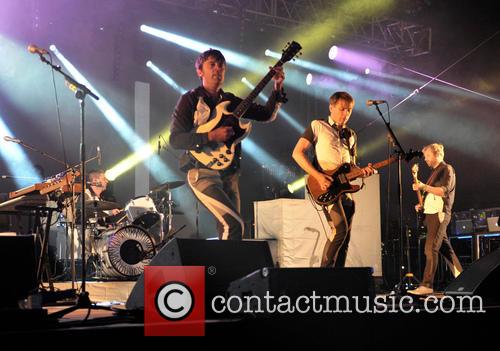 FFS was produced by John Congleton at RAK Studios in London. As someone who’s worked with the likes of Anna Calvi, St. Vincent and David Byrne, we can expect a taut and crisp sound. The two bands are suited to each other stylistically, with the idea to collaborate coming a very long time ago - around the time of Franz Ferdinand's 2004 breakthrough 'Take Me Out', no less.

Speaking to the NME about the recording sessions and the end of last year, and how the agreement to hook up came about, Franz Ferdinand’s lead singer Alex Kapranos said “We approached it the way bands do with their first record.”

“We had the songs first, rehearsed them and then recorded it all together, in a room. So no hanging around or fannying about,” he continued. “The real motivation was to make something new, not 'Franz featuring Russell Mael', or 'Sparks with Franz Ferdinand backing them'.”

A week after the album’s release, FFS will embark on their first public performance at Glasgow Arts School on June 16th, before heading off to Europe on a small tour of major cities and continental music festivals.

Watch the video for FFS’ first single ‘P*** Off’ here.