Frankie Sandford's Engagement Ring Was Presented By Her Dog 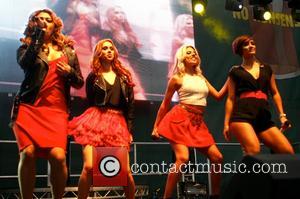 British pop star Frankie Sandford received a "weird" marriage proposal from her soccer player boyfriend as she found the engagement ring tied to a ribbon around her dog's neck.

The Saturdays star announced her engagement to Brighton & Hove Albion player Wayne Bridge earlier this month (Apr13), and she has now revealed the details of how he popped the question.

Sandford explains Bridge involved her two dogs, dressing them in bride and groom outfits, and she found a diamond sparkler attached to a collar.

She tells Britain's Capital Fm radio station, "Wayne took me to a hotel and he got my dogs involved. I didn't know my dogs were there and they came in in little bride and groom outfits. And Pixie had the ring around her neck on a ribbon.

"I think for people who aren't dog fans it's a bit of a weird proposal so I feel like I only want to tell people who like dogs."

The singer also reveals Bridge's odd behaviour in the run up to the proposal made her worry about the state of their relationship, adding, "He'd been acting so weird that when he left to come back in and do the whole proposal thing in my head I was thinking, 'Oh no we've become one of those couples that can't make conversation at dinner.' I was panicking! But it was because he was pooing himself (frightened) all night. And then my family came in and surprised us."