By Andrew Lockwood in Music Reviews on 11 October 2010

Having tried her hand(s), with a modicum of success, as well as lavish critical acclaim and a loyal fan base in each instance, one time drummer Frankie Rose has decided it's time to up sticks and move out front, where the view is clearer and the authority can be hers to command. Having been in three de rigueur bands already (Dum Dum Girls, Vivian Girls and Crystal Stilts) Frankie has taken up the guitar, created a new five piece outfit, Frankie Rose & The Outs, let her songwriting skills blossom and delivered a belter of a debut album.

The tracks on Frankie's eponymous album are all short blasts of perfectly crafted power pop of the highest order. Not only that it is almost unique among contemporary releases in that it is not too heavily front loaded, gains momentum throughout and is a joy right up until the closing bars.

If you were of the opinion that it would be ill conceived for a band, let alone an American girl band, to try and even get close to emulating the wondrous Jesus & Mary Chain then you may want to reconsider after hearing the album out. On 'Girlfriend Island' and then again, without even trying to conceal its origins, on the closer 'Save Me', Frankie and her troupe superbly mix together just the right amount of percussive subtlety, heavenly vocals and fuzzy guitar to produce a near flawless reinterpretation of 'Just Like Honey'. 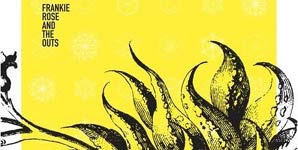