Frank Eddie - (Let Me Be) The One You Call On Video

Artist: Frank Eddie
Song title: (Let Me Be) The One You Call On
Year: 2012
Genre(s): Electronic

Frank Eddie's second single, (Let Me Be) The One You Call On, will be released on January 23rd, 2012, through his own label, Impotent Fury.

The video for (Let Me Be) The One You Call On is directed by Frank Eddie's own animation company Airside and Mr. Kaplin. The truly surreal concept sees odd creatures that resemble tic tacs singing parts of the song from various orifices, before we shoot up to see the mother creature, literally. What looks at first glance to be a planet, turns out to be the body of the green creature, inhabited by smaller versions of her. The video was shown on Channel Four's animated strand Random Acts in December 2011.

The name Frank Eddie may not sound familiar to you but Fred Deakin might. Deakin is one half of cult electronic act Lemon Jelly, who formed in 1998. Along with Nick Franglen, Lemon Jelly released three EPs, two studio albums and a compilation album to mixed to positive reviews. In 2008, Lemon Jelly announced they were going on hiatus to pursue solo careers, with the intention of recording again in the future. 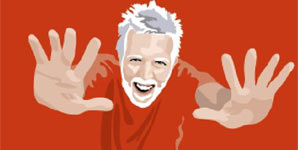 Frank Eddie - (Let Me Be) The One You Call On Video