Untouchable [aka The Intouchables] Review

Based on the true story of an unlikely odd couple who give each other a new lease on life, this French comedy-drama is almost irresistibly engaging. So it's no wonder that it's taken the international box office by storm, becoming the most successful French film in history. Thankfully, its sparky sense of humour keeps the heartwarming story from becoming too sentimental. And the cast is enormously likeable. 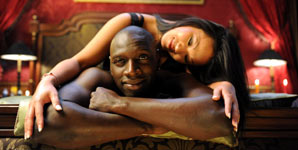 It's about Philippe (Cluzet), a wealthy Parisian who can't cope with the way everyone condescends to him as a paraplegic. Which makes hiring a full-time carer very difficult until he sees the inexperienced tough guy Driss (Sy), who only applies for the job to satisfy one of the conditions of collecting his unemployment benefit. But Driss' quick wit and lack of pity appeal to Philippe, who hires him against the wishes of his minders (Le Ny and Fleurot). And sure enough, Driss doesn't fit in at all. But his growing friendship with Philippe earns the respect of the staff.

The central theme here is that compassion, friendship and honesty are often far more important than experience and efficiency. But this is never laid on too heavily in a film that concentrates instead on an unexpected relationship that deepens as these two men confront each others' weaknesses. This is often awkward and uncomfortable, but along the way Driss helps Philippe come out of his self-exile, while Philippe gives Driss the self-confidence he needs to get his life back on track. And Cluzet and Sy have such terrific chemistry that we never get tired of watching them bicker and fight even as they make each other (and us) laugh.

This French dramatic comedy film tells the story of an unlikely friendship between a quadriplegic aristocrat who was injured in a paragliding accident and a Senegalese young offender who, under the rules of the work based project he has been put on, applies to be his live-in carer but only to get a signature to say he went to the interview. Philippe hires the young man, Driss, based on his physical strength and forthright attitude, and despite their very opposite backgrounds and the warnings given to Philippe by his staff the pair embark on several adventures together.

For years it's been tradition for Max and his friend to take a yearly holiday at his beach house, this year is set to be no different until one of the group is seriously injured in a car crash. The group of old friends visit the injured Ludo in hospital and decide that they should still go ahead with their trip.

Untouchable [aka The Intouchables] Movie Review

Untouchable [aka The Intouchables] Movie Review

Based on the true story of an unlikely odd couple who give each other a... 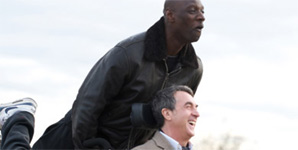 This French dramatic comedy film tells the story of an unlikely friendship between a quadriplegic... For years it's been tradition for Max and his friend to take a yearly holiday...