Live at Leeds 2014 is now just days away. Here's our preview of this UK's premiere inner-city festival.

Continue reading: Something For Everyone! 10 Of The Best At Live At Leeds 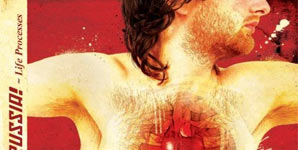 Despite it being a clichéd way to review a second album, Life Processes is indeed a more mature offering than previous Forward Russia material. Having said this, it was always pretty obvious that they were a cut above the rabble in terms of their ability to craft songs. Any cheeky band of young monkeys can slap together the chords for a cheeky indie pop number, but an artistic statement takes more integrity and thought. Is that indeed what Life Processes represents? In a word, maybe.

What is certainly is is an engaging exercise in English art rock with a more aggressive and focussed dynamic than Give Me A Wall. 'We Are Grey Matter' is a heavy, aggressive stand out track, but it is complemented by more gentle pop strains as on 'Breaking Standing'.

As an album is feels very cohesive, and has the ability to go the distance in terms of repeated listens. Perhaps the only tragedy is the lack of numerically titled songs. Anyone hoping for Forward Russia to continue into treble figures with song titles will be sadly disappointed.

iForward Russia!, Don't Be A Doctor, (Dance To The Radio), Single Review

By Dom Gourlay in Music Reviews on 05 February 2007 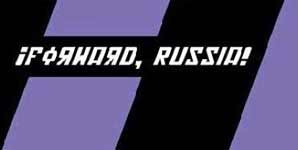 Don't Be A Doctor
Singe Review
(Dance To The Radio)

Having used up the first twenty numbers known to man, it was perhaps quite inevitable that iForward Russia! Would one day refrain from numerical digits as song titles in favour of gasp.proper, legit, words and phrases.

So 'Don't Be A Doctor' is upon us as the first fruits of the band's labours since last year's 'Give Me A Wall' long player, and if anything it's a monolithic masterpiece that combines everything that made iFR! so damn near perfect in the first place and more besides.

If previous works like 'Nine' and 'Twelve' were their 'Relationship Of Command'-like edge of commerciality fractured pop choons, then 'Don't Be A Doctor' takes the next step forward into 'Deloused.' territories, as Tom Woodhead's initially calm "You furnished a cave with innocent hands" mantra evolves into a full-blown assault that fuses metal, math-rock and general discordance lasting a full seven minutes before imploding in a hail of its own vitriol.

But of course, where iForward Russia! are concerned, why would you want, or indeed expect, anything less.

FORWARD RUSSIA - Don't Be A Doctor