Is it 1979 again? That's what the Gary Numan-esque style of Joel Ford and Daniel Lopatin immediately sounds like on Channel Pressure. Formerly Games, until legal disputes with the West-Coast rapper forced them into just using their surnames, the American duo have continued the work from last years That We Can Play to provide more heavily-80's induced pop. With the severe use of digital and analog synthesizers, drum machines and MIDI sequences the influences are very clear and definitely takes the listener back to a bygone era and a sound which most of us thought was left in the past. 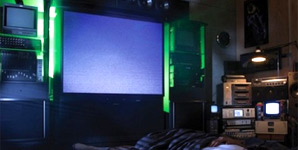 Following the unfortunately titled intro 'Scumsoft,' title-track 'Channel Pressure' is a considerably upbeat electronic song that incorporates barely comprehendible vocal spots, delivering a sound that is reminiscent of some of Kraftwerk's best moments. This surge of minimalist, strictly electronic instrumentation soon disappears as the all-out pop tune that is 'Emergency Room' delivers an archaic piece of pure 80's cheese. Coming across more as a B-Side to a Tubeway Army track than anything original, it is fitting then that the track is titled 'Emergency Room' as the pulsating synth driven hooks sound more like a piercing ambulance siren than anything distinguishable from decent electronic pop from the decade of excess.

This particular style of dated pop music continues throughout the album, with the musical peak of the title-track not really being reach again during the album. However, the album does occasionally surprise, particularly with the solitary guest spot from Autre Ne Veut on the slow burning 'I Surrender,' which provides a sound that accompanies the avant-garde R&B singer particularly well, offering fans of his a more of a classically electro-tinged sound than that of his usual output. The track 'Joey Rogers,' the name of which refers to the protagonist of the concept of the album, does have its moments, particularly with the well-used guitar chord that helps distract the listener from some of the cliché synth beats. But to be truly honest these two songs are probably the closest the album gets to replicating the merit of the title track.

It is quite a shame that two obviously talented musicians seem to be involved in their own Atari-drenched world. The album cover shows someone seemingly absorbed into a Tron-like world, probably a reference to Joey Rogers and the concept of the album, yet as Daft Punk showed us with the Tron: Legacy OST, there's only so far you can go with this idea before you reach a creative block.

The duo's talent is undoubted and few artists have an ear for great pop hook that these two do, this much is true. Unfortunately though they are lost in a sound that does them little favours. Whilst a re-emergence and re-invention of 80's music has been apparent in recent years, with the synth-tastic releases Washed Out and even Bon Iver, the decade definitely had some enduring qualities and that's why artists still consistently go back to the decade for inspiration. Yet as with every decade (even the sixties!) the eighties consisted of a lot of filler. The album plays as a homage to the cheesy pop of days gone by, but ultimately comes across as being worn-out and reminds us of why this sound does resonate more as a homage than a continuation of a still popular genre.