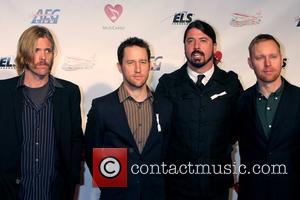 Foo Fighters drummer Taylor Hawkins has defended the band's frontman Dave Grohl against accusations he is a dominating force in the band - calling him "the nicest control freak you ever meet".
Grohl, who previously drummed in legendary rock band Nirvana, is known as a perfectionist - and his overbearing ways were previously rumoured to have caused tensions within Foo Fighters.
But Hawkins is adamant that Grohl's high standards drive the rockers onwards, and admits he is happy to take advice from the former percussionist.
He tells NME.com, "He's a complete control freak. But he's the nicest control freak you ever meet in your life.
"He tells me what to do but we work off each other as well. He's a drummer first and foremost. He's become a great singer and songwriter but he's a drummer first. When we're working together on music, not only do you have one drummer's ideas but you have two of them coming from totally different places."
And Hawkins reveals the Everlong hitmakers are in no rush to start recording their upcoming seventh studio album.
He adds, "We've gotten together and minced ideas already. We'll probably do that over the next year. We'll take our time and let everybody else enjoy other things - their families and stuff. I'd say maybe by summer we'll get in the studio and start getting serious about a record."