Grohl: 'Hawkins' Overdose Led To A Date With My Wife' 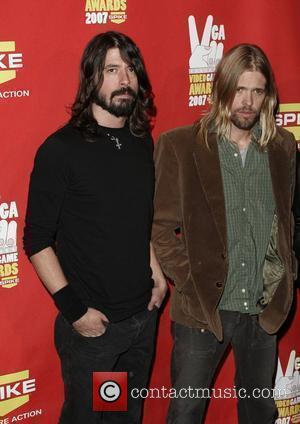 Foo Fighters frontman Dave Grohl credits his bandmate Taylor Hawkins' painkillers overdose with giving him the courage to settle down - he immediately asked his future wife out on a date. Hawkins spent two days in a coma following the overdose in 2001, and an emotional Grohl decided to contact MTV producer Jordyn Blum, who he had once casually dated - for moral support. He says, "I had decided I didn't want to get serious about a relationship because I was single and I was running around. I was free. "But that (calling Jordyn) was the first thing I thought about when Taylor came out of it. I had met the woman I should marry and have children with and I hadn't talked to her in months. "She said, 'You're the last person I thought I'd ever hear from again.' And I said, 'Hey, let's go to dinner.'" Grohl and Blum married in 2003 and have an 18-month-old daughter, Violet.