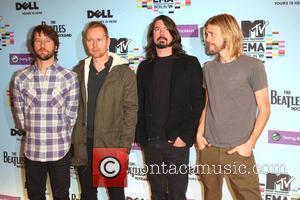 Foo Fighters star Dave Grohl is such a big fan of late Led Zeppelin drummer JOHN BONHAM he has the rocker's Zoso symbol tattooed three times.
Bonham came up with the three-circle design when asked to create a symbol to represent him on the cover of the Led Zeppelin IV album by artistic bandmate Jimmy Page - and Grohl has inked it on his skin three times.
He tells Rolling Stone, "I did the first one myself when I was 16. I tried to get different coloured ink to make it seem pro, but now it looks like someone put a cigarette out on my f**king arm."
The second was done in an illegal squat in Amsterdam, The Netherlands, and the third was Grohl's treat to himself from his first Nirvana pay cheque.
He recalls, "Kurt (Cobain) and I were living with each other in Olympia. The place was so depressing.
"I took the $400 and bought a Nintendo, a BB gun... and got that tattoo."