Roger Taylor and John Paul Jones played along on a cover of Queen's hit 'Under Pressure'.

They were forced to cancel their two Wembley enormo-gigs as well as their headline Glastonbury performance after Dave Grohl broke his leg earlier this summer, but Foo Fighters made their triumphant return to the UK with the first of three shows at the Milton Keynes Bowl – and they brought along some pretty big names to help them celebrate.

Performing the entire two-and-a-half-hour gig from a huge motorised throne, embossed with the Foo Fighters logo, Grohl announced to the crowd on Saturday night (September 5th): “We came back for you! We waited a long time to be here.” 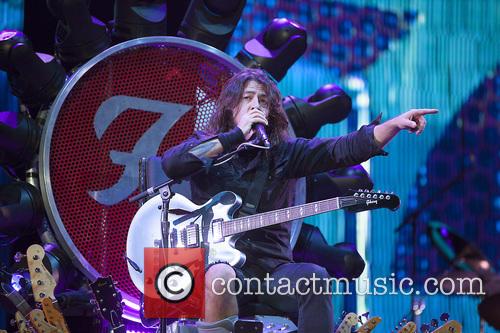 Later on in the evening, the evergreen outfit was joined onstage by Queen drummer Roger Taylor and Led Zeppelin bassist John Paul Jones for a rendition of Queen and David Bowie’s 1981 Number 1 single ‘Under Pressure’. Eagle-eyed fans will have remembered that Jones has previously collaborated with Grohl, in the short-lived supergroup Them Crooked Vultures with Queens Of The Stone Age’s Josh Homme in 2009.

Before kicking off ‘Under Pressure’, Grohl told the crowd: “I don't know if ya'll have ever seen a supergroup? Well, this is a super-duper-group. Let me just tell you that the Foo Fighters, right now, are living out our rock'n'roll fantasy.”

Back in June, the Foos were just two songs into their set at Gothenburg’s Ullevi Stadium when Grohl mistimed a jump onto a ramp and fell off the stage, breaking his leg in the process. Though he returned to the stadium to finish that gig having been to hospital, the recovery process meant that the group had to cancel and re-arrange a huge number of dates, including all of their British ones scheduled for that month.

Grohl addressed the crowd and apologised for the long wait. “It's been about eleven weeks since the incident. The last thing I wanted to do was cancel shows. I hate cancelling shows. I'm sorry for making you wait so long.” He then promised to play an extended set, challenging his audience: “Who's gonna lose their voice first? Not me.”

The group plays the Milton Keynes Bowl again on Sunday night (September 6th), before the re-arranged gig at Edinburgh’s Murrayfield Stadium on Tuesday (September 8th). They’ll then be picking up the thread of their current North American tour.