Over the last decade, Foo Fighters have produced some fine singles, but when it came to albums, their efforts have been somewhat lacklustre. One by One was filled halfway with great tunes, and halfway with filler. In Your Honour, their ambitious double album suffered from the same problem: it was just too long. And while their last effort, 2007s Echoes, Silence, Patience and Grace was a definite step in the right direction, Wasting Light sees the Foo Fighters back on top form, firing on all cylinders. 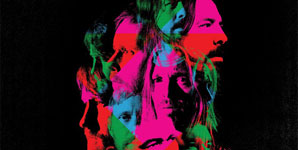 The album opens with the anthemic Bridge Burning, which seems closer to Grohl's work with Them Crooked Vultures than any of the Foo Fighters more radio friendly fare. Guitarist Chris Shiflett was really let loose to solo like crazy in the middle section. This has been advertised as their heaviest work yet, but it isn't that much of a radical step up. It is however their most consistent album for some time. Lead single Rope is fairly representative of the album's sound: it is a big, dynamic, hook-laden rock monster of a song. This album is full of those, like White Limo and Dear Rosemary, which features Bob Mould on backing vocals.

Elsewhere on the album, there are more melodic, but still big, heavy rock songs like Back and Forth, one of the album's many highlights. This song could easily have been lifted from 1997's The Colour and the Shape, as could the album's closing song, Walk, which goes out kicking and screaming, with the incredibly passionate refrain of "I never want to die". It is a brilliant way to go out, and probably up there with their best work. It is easy to see why the band were eager to get out and preview the entire album live before its release.

In between these faster, more upbeat songs there are one or two slower tracks, such as These Days, which has 'single' written all over it, going from lightly picked guitar into an overdriven chorus. I Should Have Known (featuring Krist Novoselic of Nirvana on bass) sounds like nothing the Foo Fighters have ever put out. It is a thrilling and emotional listen.

This is the album Foo Fighters fans having been waiting for the band to make since There Is Nothing Left to Lose. It is all the things the Foo Fighters do the best: big choruses, big hooks, and big anthems. They seem to have cut away all the fat of the previous decade's releases and become more focused and confident. With Wasting Light, Foo Fighters are cementing their place as not only the biggest rock band in the world right now, but also the best.