Directed by Entrepreneurs - aka Adam Crisp - the video shows Foe in a short, red wig singing directly to the camera, with simple hand movements. As many as six projections of Foe in a blonde wig stand behind her, singing along and occasionally taking over vocals.

Foe is Hannah Louise Clark on vocals and the aforementioned Adam Crisp on production. Before creating her alter-ego Foe, Hannah was previously part of a pop band, Arthur, which slowly evolved from catchy tunes to darker material. Hannah then reinvented herself as Hannah Shark before starting Foe. Hannah has acknowledged that her jaded view of the world comes from watching the events of 9/11. Her debut EP, 'Hot New Trash', was released in April. FOE recently appeared on a 'BBC Introducing...' session, hosted by DJ Steve Lamacq. 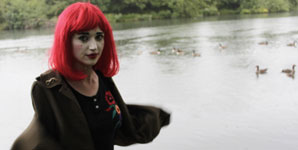