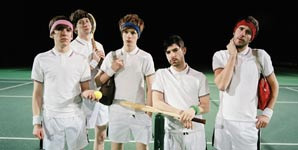 Thursday night in Nottingham is so evidently Student Night, and with the first week of Fresher's fortnight about to draw to a close, there's an air of uncertainty all around us. Partly, it seems, due to the lure of exciting, new surroundings away from the glare of ma and pa, but mostly one suspects due to the cheap alcohol on offer at just about every licensed premise in the city this evening.

The fact that Foals - this year's NME Student Guide cover stars and soon-to-be-soundtracking the next series of Channel 4's 'Skins' - are in town may also play a part in the giddy atmosphere in and around Nottingham's Masonic Square. The fact at least half a dozen Sid and Cassie look-alikes from the aforementioned teen drama hover around intently tells its own story, as do the alarming number of fluorescent glo-sticks being wafted around like magic wands at a Paul Daniels convention.

Although the whole "new rave" concept is very much last year's thing, no one seems to have told Metronomy who play what can only be described as Daft Punk without the spit and snarl one would expect of anything associated nominally or otherwise with the latter. Sure, this kind of thing has a time and a place but 8 o'clock on a Thursday evening isn't one of them and the confines of next door's bar, particularly at £1 a pint, seems a better option for the next 20 minutes at least.

By the time Foals appear onstage, we're suitably refreshed and ready for anything - almost. You see, one of my main gripes with the Oxford five-piece is that despite all the pre-match hype about them being one of the country's most inventive bands at the moment, there's something quite rudimentary, and almost regimental about what they do. Certainly there's no denying the fact that 'Hummer', which closes tonight's show, is indeed a massive tune and rightly lauded by almost everyone who's heard it, but so much of their material sounds like the last one before it any distinguishable marks are seemingly erased before the first chorus (if there is one) kicks in.

Reference points become obvious - Bloc Party and The Rapture the most blatant - and the marriage of math-rock tendencies with dance-based rhythms has shades of New York's Battles about it, if you were a poor man living on benefits at least.

The potential undoubtedly is there, but at this moment in time the songs aren't.