With Bloc Party on temporary (?) hiatus, the way seems clear for Foals to ascend to the now vacant position of everyone's favourite credible indie types, an aspiration that can't be hindered by the Oxford quintet's decision to opt for a little major label muscle to help.

Not that this stopped them virtually combusting during the process of recording Total Life Forever, even after TV On The Radio production svengali Dave Sitek had been dispensed with in favour of the not-so-household name Luke Smith. Anyone who expected Smith's presence as a portent for more math-rock with knobs as per Foals debut Antidotes should prepare for a surprise though: whilst Yannis Philipakkis isn't exactly ready for the floor now a la Kele, he's clearly now living in a world of much broader horizons.

There is a bond of sorts between then and now; whilst there's nothing as overtly angular as Cassius or Balloon, the arpeggios of Miami and the title track show that Foals are not quite ready to shed older their skin yet. Not exactly backward looking, these are exceptions however rather than rules; closer What Remains rumbles like a valley full of thunder, whilst the now familiar Spanish Sahara sounds far more complete when set in its rightful context, erudite but graceful. 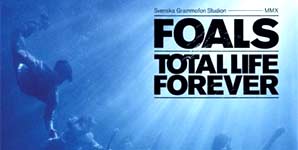 Philippakkis has recently gone on record as describing Antidotes as one-dimensional, and whilst he's undoubtedly being more than a little hard on himself, Total Life Forever is that happiest - and rarest - of hybrids, an artistic triumph that could also satisfy the band's new paymasters and their unit-shifting obsessions. Delicate opener Blue Blood ushers in a newer, less abrasive tone whose accessibility should draw in a new audience, but whilst Two Trees shimmers beautifully as if Brian Eno were at the studio controls, it's still a world away from the stadium filling guff of Coldplay and Snow Patrol.

A year ago it's safe to say that not many people would've expected Foals to be delivering songs like Black Gold and After Glow either, both clocking in at over six minutes long but more significantly both with any former abrasiveness swapped for blue eyed introspection. They blend in seamlessly into a picture that's complex and intimate but not obtuse, and whilst Total Life Forever is record that almost never got made, it stands as an accomplishment worthy of a band who can now plot their own destiny.