Having created one of 2010's most inventive records with 'Total Life Forever', Oxford's Foals have already gone someway towards silencing the doubters - yours truly included - unsure about their Bloc Party-esque 4x4 math rock stylings of yore. The fact this evening's show sold out weeks ago tells its own story, while the fact said album found itself as one of the firm favourites among this year's list of Mercury nominees suggests they're no longer the student party band for the new rave intelligentsia, instead rightly viewed as serious contenders by an industry deftly suspicious of such maverick artisans. 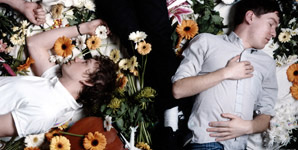 With a ridiculously early start time of 6:45pm, its difficult not to feel some degree of sympathy for openers Trophy Wife. Having to play the first half of their set while most punters are still queuing to get in, it's a tall order for the Oxford trio to fully get into their stride in such cavernous surroundings. When they do however, such as on current single 'Microlite' they blossom and flourish, partly reminiscent of experimentalist outfits like The Invisible while other times a healthy throwback to more insightful 1980s combos such as The Lotus Eaters or Talk Talk.

Sadly, the same cannot be said for the main support Crystal Fighters, a band who seem to have walked straight off the set of Channel 4's 'Skins' via Nathan Barley's visual stylist. There's a spate of unholy wailing from the singer mixed in with an uncoordinated rasp of beats that occasionally take on a currently hip Balkan flavour. Indeed its almost like Eurovision for the blind - blind because if one were to close their eyes, they'd half expect the stage to be amass with Eastern Europeans that shouldn't know any better rather than East London's finest - whatever that may be. Quite frankly, Crystal Fighters represent all that's wrong with the music industry at this moment in time and are possibly the worst case of style over substance these eyes have ever seen.

While their audience finds itself split between the post-rave late-teen/early-twenty-somethings intent on partying and those of a more mature technically minded muso slant, it could be argued Foals have the best of both worlds to engage in. However, where many bands with a similar demographically sparse fanbase would probably fail on the grounds of taking the wrong option and keeping only half their followers content, Foals strike a healthy balance between both parties from the off. Indeed its this mix of old and new material that keeps the set fresh and exciting, not to mention the seemingly improvised segments that ease the transition from newer expansive material like 'Blue Blood' into latter-day workout 'Olympic Airways' effortlessly.

The most noticeable aspect of their performance is undoubtedly the taut complexity of their musicianship. Whether it be the relentless tub-thumping of Jack Bevan or Jimmy Smith's cleverly orchestrated guitar signatures that drive and accentuate every song. Frontman Yannis Philippakis also takes on a more composed, confident demeanour, culminating in several leaps into the audience while at one point playing from the venue's rafters.

Their marked progression is highlighted during the encore, when early songs 'The French Open', 'Hummer' and 'Two Steps Twice' are reeled off in quick succession. While not sounding out of place, there presence after the far superior likes of 'Spanish Sahara' and 'Two Trees' really hammers home just how much Foals have developed in such a short space of time, and like that of another more renowned five-piece from Oxford, we can only await their next move with baited breath.