For their third full length outing, Flowers of Hell have chosen to release 'O' - a 45 minute song they've mixed in Dolby 5.1 surround sound. For those not familiar with Flowers of Hell they describe themselves as a space rock orchestra which is a fair point considering they have 16 members and numerous collaborators (Sonic Boom has been known to frequent their recording sessions as have members of The Earlies).

'O' offers no great departure on their trademark sound which is reminiscent of a classical take on Spiritualized. It meanders along pleasantly enough sounding like an extended intro for the first 26 minutes before starting to build up to a point whereby it feels like FoH could go into full overload... but they don't, opting instead to hold back. As such 'O' inevitably fails to reach the levels of intensity it threatens to deliver, choosing instead to meander with no real destination in mind. It would be fair to say that they could have achieved what they wanted to with this piece of music in a much shorter space of time. 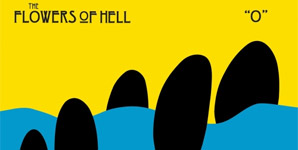