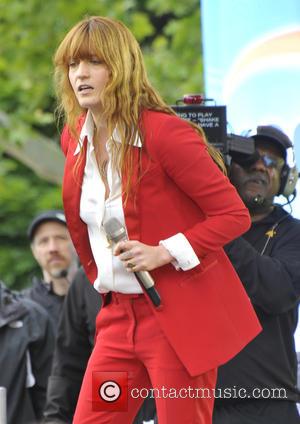 Florence + The MAChine have replaced Grohl's group the Foo Fighters as the headlining act on the opening night of the event after the rocker fell off stage at a Swedish gig earlier this month (Jun15) and broke his leg.

Welch, who sustained a similar injury after jumping off stage at the Coachella festival in California in April (15), believes in the healing powers of Glastonbury's mythical setting in Somerset, England and wants to use her festival set to help Grohl get better.

She tells Britain's The Guardian newspaper, "It's the broken hearts and broken limbs that led to Glastonbury. It's a strange and quite cracked way to get there. Literally. If I'd had six months knowing that I was going to do (the headline slot), I think I would have slowly descended into madness. But Glastonbury is such a powerful place that I feel we should get everyone in the crowd to use their healing powers - utilise the ley lines - to help Dave's leg. Maybe I should hold a ceremony in the healing fields for him."