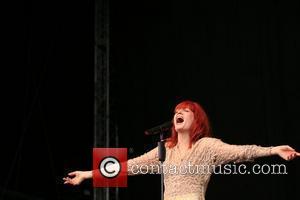 Florence and the Machine singer Florence Welch felt awful when she realised Lady GaGa was wearing a meat dress at the 2010 Mtv Video Music Awards - because she had hugged her while wearing a borrowed Givenchy gown.
The Dog Days Are Over singer thought Gaga's outfit was odd but was too excited to notice just how odd it was - until later.
She tells Spin magazine, "I didn't notice that it was made of meat - it must have been treated. I thought she just had some kind of body paint on or something. I did not notice until she got up onstage with Cher. She was even holding a meat purse.
"I felt guilty because I was borrowing this Givenchy couture dress, and I just rubbed myself all over this meat. I felt bad for Givenchy."