Florence and the Machine - Dog Days Are Over Single Review

Review of Florence and the Machine's single 'Dog Days Are Over'. 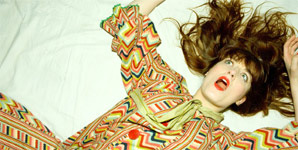 After a summer of festival appearances and the success of ubiquitous first single 'Kiss With A Fist', Florence Welch and her Machine have been rewarded with a place on the NME Awards Tour 2009. They celebrate this great honour bequeathed upon them with the release of new single 'Dog Days Are Over' on Moshi Moshi Records.

It's brilliant. It's a masterful yet primal tour-de-force of folk/pop/rock that reveals a beguiling talent that should surely be regarded as one of the finds of the musical year. There is a sheer vitality contained within these four minutes that is as rare to find as it is refreshing to hear, suggesting that FATM are more in commune with the spirit of, dare we say, 'rock n' roll', than so many other not-to-be-mentioned members of the current London folkpop community.

Produced by James Ford, erstwhile of the Klaxons and the Arctic Monkeys, 'Dog Days Are Over' succeeds in capturing a powerfully 'live' studio sound that sinks, swells and explodes in a series of unconventional verse/choruses that, accentuated by Welch's snarling, whooping vocal delivery, lose none of their potency even after repeated listens. Instrumentally it's a marvellous blend of reverbed ukulele, lushly layered vocals and present tribal drumming and whilst there is much made of Welch's expressive Bjork/Tori Amos/Kate Bush eccentricities, it is the sleazy PJ Harvey rock-leeryness in her voice that engages the listener.

The B-side cover of The Source ft. Candi Staton's 'You've Got The Love' is equally strong. From the moment the drums come in a little too early, the song radiates a similarly live, almost ragged punky atmosphere that pushes even higher the inevitable crescendo of Welch's piercing melody and wailing harmonies. Only one question remains. Are all her songs this good? All shall be revealed in 2009...