Blending their unique concoction of sensual sound and poetic justice, Floetry is set to return to the musical landscape with their third CD Flo’Ology. This time, Marsha Ambrosius (the Songstress) and Natalie Stewart (the Floacist) remain true to form by uniting passionate vocals and elegant spoken word with the rhythms of classic soul, funk and a little bit of island spice! But while the tried-and-true formula that worked so well for Floetic garnered praise by critics and gave the London duo a devoted fan base is the same, the pair are quick to point out the differences between Flo’Ology and the themes exemplified on their six-time Grammy nominated debut album and its follow-up Floacism (Live).

“First, there’s no headache on this album,” says Stewart, who as a poet draws her songwriting skills from both articulating her personal thoughts and experiences, as well as translating her observations. “Flo’Ology is less about victimization. It’s about women taking more responsibility for what goes on in our lives. On the first album, Marsha and I were 21 and 23. Now that we’re a bit more mature, we’ve come to a better understanding of ourselves and naturally that’s reflected on the album.”

“Plus, we’re just more aware that we were creating an album this time,” Ambrosius interjects. “With Floetic we made a bunch of songs without necessarily realizing we were making an album. It was more of a demo situation. At the right time, the right place, we walked into a studio in Philadelphia and didn’t really grasp the situation like we could have. It was the perfect way to make that album and I think everybody would be happy if they got Floetic again, but Flo’Ology is the next phase in our lives, in our music.”

Entering the next phase meant branching out to new producers as well. While still working with Keith “Keshon” Pelzer and Darren “Limitless” Henson (“Let Me In” “Lay Down”), part of the musical force behind the first album, Floetry also enlisted the musical talents of Scott Storch who produced “My Apology,” & the first single “SupaStar” featuring Common. Other great producers include Rafael Saadiq (“Imagination”) and Whiteleaf Productions (“I’ll Die,” “Closer”).

“Our choice of producers just sort of happened,” says Ambrosius, who also produced two songs on Flo’Ology (“Feelings” and “I Want You”). “It’s not like we made a list and decided let’s get some songs from these particular people. We heard a lot of music and we didn’t record anything that didn’t feel right. The music speaks to us. The concepts are obviously from ourselves because we write it all, but the music influences where we’re going to go with it.”

Whilst creating Flo’Ology, the music took Ambrosius and Stewart throughout the spectrum of romantic relationships. On up-tempo grooves like “My Apology” and “Let Me In,” they offer a sophisticated look at the often confusing aspects of matters of the heart. Then on “Lay Down” and “Imagination,” the pair delves into the sensual side of love. Finally, “Waiting In Vain”—a remake of the classic Bob Marley song—and the heart-wrenching ballad “Feelings” explore the effects of unrequited love.

““Feelings” was a very, very honest moment for me. I don’t think someone could sing “Feelings” and not have experienced it,” Ambrosius says. “Every time I hear that song, it puts me back in that place I was in when I wrote it. It’s been a long time since a piece of music had allowed me to do that. When you hear the piano coming in, you know I meant every word of that song.”

Stewart adds: “This album is completely and utterly self-centered. It’s about breaking ourselves down over and over and over again, knocking ourselves off our pedestals and then building up again and getting knocked off again. It’s about going through the ego cycle. Every song speaks to a different mood and feeling. For instance, when we were writing “Imagination,” Marsha and I felt very powerful that day. It was just real straight up and down woman power and it’s not very often that women get to feel powerful about the fact that we are women. At one point, we felt like if we snapped our fingers, every man in the room would start stripping. The sensual energy and magical power that day was amazing and that’s what we wanted to capture and package in that song.”

Stewart and Ambrosius’ undeniable chemistry is at the root of their eargasmic blend of rhythm and rhyme. Having met for the first time as rivals on the basketball court in South London, the pair became fast friends when they attended the Brits Performing Arts School. Marsha studied business and finance while Natalie pursued acting, writing and directing. Post graduation, they remained in contact. Marsha pursued music, recording a demo that was played on the radio in London and her songwriting skills landed her a publishing deal. Natalie was enrolled in North London University and was one of the founding members of 3+1, a performance poetry crew heavily featured on London’s vast spoken word scene. It was during this time that the two women decided to join together to form Floetry.

Receiving accolades in London from their live performances and after a brief nine months stint as a group the duo was invited to Atlanta to perform on the spoken word circuit. Shortly after their arrival, they went to Philadelphia to grace the stage of Black Lily, the women’s collective of performers that first launched Jill Scott to fame. It was in Philly that they met their manager Julius Erving III, the son of hoop legend Dr. J. Erving. During that time they were also introduced to Jeffrey “DJ Jazzy Jeff Townes” and their partnership with A Touch of Jazz Productions resulted in the birth of much creativity. Floetic soon followed, as did an extensive career in songwriting. The ladies went on to pen songs for artists such as Michael Jackson (“Butterflies”), Jill Scott, Glenn Lewis, Bilal and most recently, the chorus for Styles P hit single “I’m Black.” Marsha is even credited for the haunting background vocals on Justin Timberlake’s hit “Cry Me a River” and is featured vocally on Dr. Dre protg The Game’s “Start from Scratch”. Floetry also garnered a lengthy list of nominations and wins for prestigious awards, including six Grammy nods, six Soul Train awards, and a NAACP nomination for best new artist.

“We felt like we worked hard and we deserved [those accolades],” says Stewart, who along with Ambrosius has performed 160 live shows per year since Floetic’s release in 2002. “We didn’t expect anything when we made Floetic. I think when you’re in expectation mode; you’re not focused on really doing. When you are truly working so hard on ‘being’ and you get the phone call that you’ve got three Grammy nominations, you think ‘you know what? I feel like we deserved that because we worked so hard’.”

“We love Floetic and that album was the best album we could make at that time but, we’re different from who we were then, “Stewart continues. “The highest compliment that anyone could give Flo’Ology is to say we’ve changed. People are so scared to for some reason, but that’s what life is. That’s what this album is all about.” 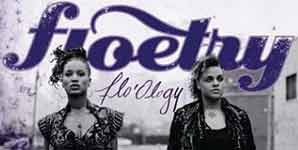