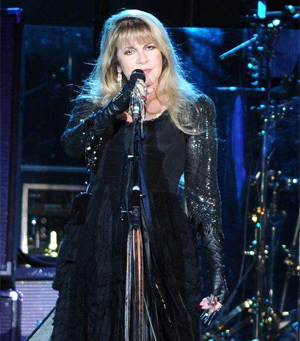 Iconic band Fleetwood Mac today announce that they will play an additional O2 Arena show due to demand as part of their much anticipated UK arena tour! The band will now play The O2 on the 25th of September in addition to their previously released date at the venue on the 24th of September. The multi-Grammy winning Rock & Roll Hall of Fame inductees will grace British soil in September and October of this year to play arenas in London, Birmingham, Manchester and Glasgow following a huge 34-city US Tour. Fleetwood Mac tickets are on-sale now.

Fleetwood Mac last toured in 2009 with the sold out Unleashed Tour. The current lineup includes Mick Fleetwood and John McVie - both original members since l967, Lindsey Buckingham and Stevie Nicks who joined the band in l975.

This tour also marks the 35th anniversary of the release of their classic 'Rumours' album (1977), one of the most successful albums in recorded history with sales exceeding 40 million copies.  'Rumours' planted itself at the top of the pop charts for over 31 weeks and had four top ten singles. The expanded edition's three CDs include the original album, the b-side of 'Silver Springsm,' a dozen unreleased live recordings from the group's l977 world tour and an entire disc filled with unreleased takes from the album's recording sessions. The deluxe edition includes all of the music from expanded version, plus an additional disc of outtakes on DVD that features 'The Rosebud Film,' a l977 documentary about the album and the album on Vinyl.  Digital versions are also available.

Nicks has just completed a two year tour coinciding with the release of her critically acclaimed 'In Your Dreams' CD which debuted at No. 6 on the Billboard Pop Charts.  'In Your Dreams' was released on Reprise Records in 2011, and was co-written and co-produced by Dave Stewart and Glen Ballard.  Nicks also produced and co-directed a documentary film of the recording of 'In Your Dreams' which has received rave reviews at the Hamptons International Film Festival along with several other film festivals.

Buckingham has been touring to sold-out crowds over the last year in conjunction with his critically acclaimed September 2011 release of 'Seeds We Sow', his 6th solo studio album and first independent release, which debuted at No. 6 on Billboard's Rock Album Chart. He was recently honored with ASCAP's Golden Note Award, and has also received the prestigious Les Paul Award.

John McVie has spent the past three years enjoying his family and solitude at home in Hawaii.

'Having started Fleetwood Mac with John McVie in 1967, it has always been so gratifying that despite the various incarnations, the band has survived. Throughout the years, though, the one thing that has remained constant is our fans. I am looking forward to getting back behind the kit, reconnecting with the fans and sharing the stage with my fellow band members,' commented Mick Fleetwood.

'After spending four days at Lindsey's house working on music and one really fun day doing a crazy photo session, I am quite excited about next year.  Everything seems to be falling into place.  2013 looks like the year of Fleetwood Mac,' commented Stevie Nicks.

'I'm really looking forward to hitting the road with Stevie, Mick and John in 2013.  It's been over three years since we've toured together and happily the break allowed me to explore a lot of uncharted territory as well as experience tremendous growth creatively.  I'm excited to bring that back to the band.  When everyone in FM wants the same thing at the same time, it's cause for celebration.  Long Live Fleetwood Mac!' added Lindsey Buckingham.

'I'm really looking forward to going back on the road,' commented John McVie.