Fleetwood Mac Have Sparked Concerns Over Their Headlining Festival Slot This Weekend (13-14jun15) After They Cancelled Another Concert Due To Illness. 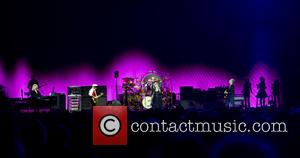 The veteran rockers postponed a gig in Birmingham, England earlier this week (begs08Jun15) due to a mystery illness, and now a further date in Manchester, England on Friday night (12Jun15) has been scrapped.

The news has sparked concerns over their prestigious headlining performance at Britain's Isle of Wight Festival, their only festival appearance of 2015, on Sunday night (14Jun15).

A statement from their tour promoter insists the band "intend to resume the tour with their scheduled performance at the Isle of Wight Festival" but many fans are not so sure the sickly bandmember will recover in time.

The identity of the ill musician and the cause of the health scare have not been released.

More: Foo Fighters Get Their Own HBO Series (Plus, New Album News ...