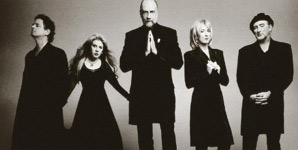 As the first tour in their forty-year career without new material to offer, Fleetwood Mac's return to European shores is far from the formulaic reunions of late; saved the clumsy necessity of shoehorning new tracks into a set of, at times, 30 years familiarity, the quartet has succeeded in weaving a touching, cathartic set that does justice to the depth of their catalogue. Focussing almost solely on the band's output since their eponymous 1975 offering, their first with one-time lovers Lindsey Buckingham and Stevie Nicks at the helm, the evening's proceedings are led by the group's American contingent; the band's world-weary backbone of Mick Fleetwood and John McVie may be first to step out as the house lights dim, but the night belongs to the pairing of Buckingham/Nicks that's so long proven the fuel to the band's fire.

While the fist-raising likes of Second Hand News and I'm So Afraid - here an exhibition in Buckingham's distinctive finger-picked style - may have proven expectable highlights, it's the introspective subtleties of the band's set that provide the most gut-wrenching and emotive moments of the show; the hushed mid-set highlights of Landslide and Storms are poignant, affecting tributes to heartbreak and nostalgia. Indeed, Landslide's wistful melancholia has begun to develop a further dimension as Nicks enters her sixtieth year; the song's anxious consideration of ageing and growth - 'Can I handle the seasons of my life?' -coloured by Nicks' tumultuous experiences, yet tonight's evidence suggests she's ridden Fortune's wheel well enough. More than thirty years after much of tonight's set was originally committed to tape, it's a pleasant surprise that the band's offerings have loss none of their potency.

The relationship and tensions between the front pair, so long left unresolved, are still evident too tonight; the vitriolic Go Your Own Way, and specifically its infamous 'shacking up' line, sees Nicks turn her back on Buckingham, turning only to spit the lyrics back at him, while Sara concludes with the pair embracing, a brief respite to the conflicts that, though now more for effect, pepper the show. Nicks' bohemian tendencies are in full flow throughout, numerous changes from one velvet gown to another abound, and the sprawling disco of her own Stand Back contrasts with the brusque punk of Buckingham's offerings, yet the brief overlaps where the pair duet result in a sweet delight, nothing short of electrifying.

For an arena band, Fleetwood Mac are more than adept at fashioning a living-room mood; the stories and introductions they give to their tracks - most notably Nicks' reverentially-received tale of her years in beatnik San Francisco that heralds Gypsy - never stray into the forced sincerity of their peers, while the finale of Don't Stop and Fleetwood's parting messages for the crowd to 'look after yourselves, but most importantly each other', the band's trademark mix of AOR and refreshingly innocent hippiedom, leave the crowd grinning. Buckingham's closing offerings - 'We'll see you next time!' - will, one would hope, ring true in the not too distant future.