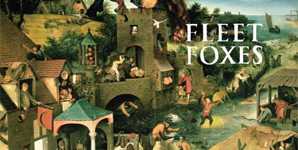 If a group of friends spent their lives being brought up listening to Beach Boys music, living in the wilderness with a lot of psychedelic and folk influences it might just result with an album something like Fleet Foxes debut.

Akin to a few other modern day artists like The Cave Singers, Midlake and Akron/ Family, this Seattle five-piece take influence from the best bits of sixties and seventies US folk records and manage to create stunning songs that make a great impact.

One of the best bits of the album are the lyrics and the way in which they're sung. At the moment lots of folk artists are causing quite a fuss in the press. Fleet Foxes should well do the same thing, they have shown that truly dynamic arrangements when used with a simple song structure can have enormous effect on the listener. Fleet Foxes has produced a timeless album and it's something that a lot of bands/artists from the USA are doing incredibly well at the moment, this band are no exception. The album could almost be a tribute to the spirit of acoustic Neil Young and their shared ability to write a hauntingly beautiful song that still meant something. Fleet Foxes are a revelation, and they sound exactly like one.

Fleet Foxes - Can I Believe You Video Video