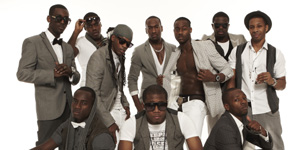 Interview with Marlon from Flawless

Since making the finals at Britain's Got Talent, Flawless have had an astonishing year. Touring across the country with their slick dance moves, they have also had time to make a number one smash hit at the movie box office and have even made various TV cameos. We talk to leading guy Marlon about the inspirations behind the dance troupe and what we can expect from their new DVD, Flawless: Live Street Dance, out this week.

CM: Hey Marlon, how you doing?
M: I'm good, it's been a pretty busy day [laughs]

CM: So going all the way back to the beginning, when did you start dancing?
M: I've been dancing since the age of four, being inspired by Michael Jackson. I was a big fan so I saw a lot of his concerts on video. I picked it up from dancing in front of the TV and pretty much self-teaching myself. As I grew up, I started progressing and becoming more interested in street-dancing. I got introduced to different colleges because everyone knew me as a dancer and they advised me to go to college and dance if I wanted to take it as a career. From there, I was introduced to different styles such as contemporary, ballet, and jazz. It opened my eyes to a different perspective because I was very much narrow-minded in the street-dancing thing. So I started having a respect for the art and it just grew from there in professional work before taking on my own company.

CM: How did Flawless form?
M: Flawless formed through education as well. We pretty much met together in the same schools and colleges. So it was a matter of me picking individuals that were on the same page in terms of wanting to take their career to the next level, as opposed to having auditions and picking great dancers that have a bad attitude. So we grew together and trained for a year together, understanding how each other work and bringing up our own style. In 2005, we started going into competitions to get the name recognised, and successfully, we won every award that was out there; the UK, International and World Championships. We were looking at how we could get bigger and getting involved in Britain's Got Talent gave us the national exposure. It wasn't about to win the competition, it was to get the name out there and spread what we're about.

CM: How was the whole Britain's got Talent experience for you guys?
M: It was quite nerve-racking because you normally watch it on TV but now you're waiting to go on and you just see these three red crosses [laughs]. That was a scary moment, but we embraced it and we just thought we're going to do what we love to do. Luckily, they enjoyed it and Simon ended up saying it was the best thing he'd ever seen.

CM: I'm guessing it was a huge feat performing in front of Simon Cowell
M: That was definitely a hard one. You're confident in what you can do but not confident in how it will be perceived, so you don't really know until they give their feedback.

CM: From your experience, do you back reality TV shows for giving a platform for undiscovered talent?
M: Yeah, it's a huge platform. There was never anything going for dance on that level before. We'd been doing it for five years but a lot of people around the world still didn't know about us. Now, it's got to a point that it's been exposed so there have been many more opportunities for dancers and for people who want to showcase their talent. We and diversity had a huge part in that. There's a positive energy coming from the UK so we're happy to be part of that.

CM: You mentioned Diversity who competed against you on the same year. Is there any rivalry between you and Diversity?
M: Never has been. From the dance world, we have been doing our thing for much longer. They first saw us at the UK Championships and they were inspired so they then decided that they wanted to form Diversity. It was never a case of being rivals, but having been in a TV competition together, it was obviously going to be a comparison.

CM: What type of dancing do you guys like doing best?
M: I don't have a favourite type anymore. When I was young and narrow-minded, I was like that. But by being educated through dance, I'd say everything's connected. I wouldn't call Flawless a street-dance group but entertainment all round dancers because we don't limit ourselves to anything.

CM: How would you describe yourselves as different from all the other dance troupes at the moment?
M: Because we have a contemporary twist to street-dancing with an acting ability or a personality with themes in shows, you get a bit of everything. So we've got a moment that everyone can relate to and we cater to all ages.

CM: Why do you think street-dancing has become a huge phenomenon recently in youth culture?
M: I think the main thing was the Streetdance movie that we did that went to number one. It was a British movie and it was in 3D. So for us to get that title was a huge achievement. We thought that it has pretty much happened now and it's a dream come true so let's not get complacent, remain humble and push ourselves to the next level.

CM: Was it a whole different experience having to shoot the movie?
M: It was different, by far. We had a character so we had to play that alter-ego and remain in that character through dance. Also filming all the different shots and angles was hard but it was also exciting because everyone on the set made one big community trying to make a great UK film.

CM: You're currently touring across the UK. What can we expect from your shows?
M: Expect to be inspired; it's all about chasing your dreams and being on a roller-coaster ride of entertainment. It's very rare that you find all of those things in a show, so to have that is an amazing thing for us. Showcasing what Flawless is and meeting the fans is a big thing. It's a Flawless Tour, not us dancing behind an artist or supporting someone. Having known that we didn't win Britain's got Talent, it should inspire young people to push themselves to wherever they want to go.

CM: What's the fan response been?
M: It's been great; we've had sold out shows and people saying that they've been inspired to do what they want to do, having been given that extra boost. We're going to be at The Royal Festival Hall from December 21-23rd showcasing the tour and we've got the 60 date tour next year starting in February so it's a great achievement from 2009 to where we're going now.

CM: You've recently released a new DVD, Flawless: Live Street Dance. What was the inspiration behind it and what can fans expect on it?
M: It was all about spreading that message. When we were on Britain's got Talent, we didn't know what the perception of the audience would be until the Britain's got Talent Tour where we saw people going crazy. So we figured that we should make this DVD to spread the message of chasing the dream and pushing yourself to the limit. The DVD has got exclusive bits from the tour and a lot of things that people don't see from Flawless; the hard work and crafting. It's a family DVD people can enjoy at Christmas.

CM: What has been the highlight of your group's career so far?
M: It would definitely be what we're doing now which is our own thing; that's a dream come true. We've danced with artists and in music videos but for people to come and see us do our own thing has given us even more motivation - the sky's the limit really.

CM: In contrast, what's been the hardest time for you?
M: The hardest point would be the managing of things on an everyday basis. You want to do more but yet you are so booked up. Also keeping connected with friends and family is a hard thing to manage but we've obviously got each other and we're more like a family unit so that's probably the strongest thing about Flawless.

CM: What have you got planned for 2011?
M: It's all about the tour which will be amazing because we're visiting places we've never been to before. It's looking really good so far.

Good luck with everything Marlon.