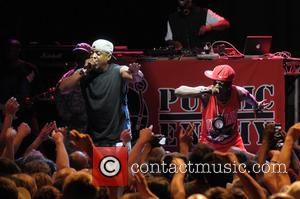 Rap veteran Flavor Flav's traffic and drug case has been postponed until May (14).

The Public Enemy star was pulled over for speeding en route to his mother's funeral in Long Island, New York in January (14). He was arrested after police discovered he had 16 suspensions on his licence.

He pleaded not guilty to counts of speeding, possession of marijuana and felony aggravated unlicensed operation of a motor vehicle during a hearing at Nassau County First District Court later that month and was conditionally released on probation.

The licence suspensions have since been resolved, but the rapper, real name William Drayton, was back in court on Tuesday (25Mar14), when he expressed a desire to wrap-up the case as soon as possible, revealing his trips from his home in Las Vegas back to New York are proving expensive.